A downloadable game for Windows, macOS, and Linux

In the midst of their hearts, something is blossoming between two students. Both of whom go about their daily lives at an international school in Tokyo.

Just what is flowering? Of course, it's love.

Starting your new life after transferring into an international school, you find yourself dismayed when it turns out to be the same as any other. Except for one thing... or person, rather. As your newly founded relationship increasingly tightens with the girl you just met, find out what there is to learn about each other as your lives intertwine with one another, discovering things about her stashed away behind a veil of timidity.

Ceridwen Erwood (CV: Amber Barile)
Ceri, a student of the Welsh International School of Japan (WISJ) is a warm-hearted girl, prone to being found immersed in the pages of a novel or the strings of a classical Celtic harp. She has a desire to study literature, though she had been known to have had a large period of time away from school due to an illness. As stated by her.

Of Welsh origin herself, Ceri's a lot more readable than her language. Or so it might seem. Timid and docile on the outside, nobody can really tell what surprises she might have in store. As you get to know her however, the truth about her becomes much more clear to you. Learn about her past, be with her in the present, and join her in the future. That is, if she opens up to you. She's an extremely shy person, so getting her to open up isn't going to be easy.

Protagonist (Player Named)
You "play" as a half Japanese, half English transfer to the WISJ.

His second week at an international school has just started. Many students seem to be pompous in his eyes. It costs a lot of money to attend, after all. Within his first week, he has managed to make a grand total of zero friends. Socialising isn't easy, at least that's what he thinks.

Unlike his father, a well-regarded owner of a publishing company, he wastes his time daily doing nothing productive. Things change however, when he meets "someone" who piques his interest.

A full list of the team and additional accreditation information can be found within the end game movies.

A forum thread can be found here to report any issues, or give any feedback. Any feedback here is also appreciated.

NOTE: The game renders CGs with a high number of pixels. This images may cause the game to slow down or "memory errors" to occur on certain systems.

What a beautiful and fantastic game. I wish, this story would last a bit longer.

What can i say? Wonderful job

(Spoilers for the game) This game is amazing. It fills me with so many emotions. Happiness, sadness, dread, so many. As someone who played DDLC (Spoilers for that game BTW) before it was known to be a horror game, when Ceri didn't come to school, my mind immediately flashed back to Sayori's death scene in DDLC, and I thought it was gonna have a sad ending. I'm glad that it didn't. This game is truly amazing, the music, the art, the dialogue, it's all amazing, solid 10/10.

i love this game :) the music ,the art style is really beautiful :)  adding a voice gives more feeling to everything  too  :)

Any hope for a mobile (android) version?

We don't have any plans for an Android release at the moment, although we've been experimenting with getting our VNs to work on mobile devices, so if we do decide to go for a full release, we will me an announcement on our Twitter!

I played this through steam. If you haven't played it, GO FOR IT.

Honestly, everything about it is just beautiful. The art style, the dialogues, the ambience and pretty neat voice acting to top it all off.

Made check this out real soon.

absolutely amazing love it thank you

the game was honestly great!

am about to play part 2 and hopefully will enjoy it as much or even more than this :)

I would like to suggest adding the possibility of changing the language (I mean Polish), I offer to make a translation. I am waiting for a response

Hi.
Thanks for the offer, however we're not looking into translating the game into any additional languages.
Thank you.

Keep up the great work. Your games are amazing

I know I'm late with this suggestion, but I'd have donated a few dollars for the game if there was an option.

I'd just like to say I absolutely ADORED this beautiful game! I left more details about my thoughts on the Lemmasoft release thread, but I wanted to quickly leave a message here that to anyone who happens to stumble upon this comment, that if you're questioning whether to get this game--DO IT! Ceri's voice acting is spot on, the writing flows well with excellent wording IMHO, it's a very soothing and relaxing experience, and very satisfying. And it's free! What do you have to lose? I promise you'll find yourself melting.

Thank you! I've read your thoughts in the Lemmasoft thread and I'm really glad you enjoyed the game that much!

I loved this! I'm Welsh so It was quite comical at times :'D This game is great, it made me feel strongly about the characters (which is rare for a game to do) Good job! :D

this is a wonderful game.i have not played the game fully yet, but i only stopped to comment. the game is beautiful! i cant believe its a free game! this game is a masterpiece in music. the tone of the music fits perfectly with what setting your in. i also really like that you can make your own story in a way with the option to say different things. Ceri is just to cute with her over all sense of loneliness. i felt good when i made her happy! if you are reading this stop, download this game right now, because i think its a story telling work of art.

I knew I would love this game from the moment I booted up the game. As a fan of anime, the anime girl, Ceri, at the main menu made me want to start playing immediately. The game does an excellent job to make you start caring for the characters. I've never played a game that made you so invested so quickly. Also, the subject of the game and the circumstances are very easy to relate with. It's as if you're going through each scenario yourself. I can go on for hours expressing my love for the game but I would probably bore you guys to death. I recommend you play the game for yourself. It's really good! Also, if you want, you can watch my playthrough of the game below:

If you liked what you saw, be sure to check out my channel by clicking the link below:

Here's the second part to my playthrough if you wanna know what I mean:

I know I write here a lot but I can't get enough of this game. It's absolutely great. The road the game is going down is somewhat cliched but I can easily forgive it due to the fact that I can relate to the characters and the story. To me, when the player can relate to the characters in a game, it breaks the wall between the game and the players which makes the experience seem less like a playing video game and more like a reading story or famous novel. It's funny because this game is considered a visual novel haha. Like I said before, if you're interested in the game, make sure to give it a try.

If you want, you can check out part 3 of my playthrough below:

OMG you replied ! And i also have a question . Are you planing on making more games ? And also happy easter , i hope you are healthy and happy .

Thank you! I hope you're having a great Easter as well! :)

I do plan on making more games in the future, though I don't see myself releasing any free games for a while. Mainly because of the amount of money it costs to produce. SOHL cost around x10 as much as my first game, and I really want to improve the quality of what I produce further so I'd be looking to crowd-fund a few projects and then release them for a certain price.

That being said, I don't want to neglect the free VN market. When I first got into VNs I didn't have any money to buy any, so I was limited to a small selection of free titles. I would like to release something again for free in the future, it just wouldn't be anytime soon.

I'm also working on several other projects, though they're not my own. So if you did want to check out any of that progress then I do have a Twitter account @dssansVN if you have one and wanted to follow me.

How Long is this game

If you were to read the VN 100%, achieving all endings etc, then the total playtime would be between 2 - 3 hours depending on your reading speed.

Bravo! I thoroughly enjoyed this game! This has to be one of the best visual novels i've ever seen. Keep up the good work.

It's such a lovely game! I really enjoy it and actually do an Gameplay. I highly recommend it if you want to play a nice and cute romantic game for a welcomed change of pace. I love it

I'm glad you're liking it! I really appreciate any gameplay videos, so I'll be sure to check it out. :)

I would be honored if you check it out! :) 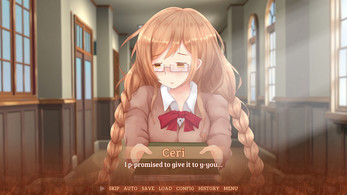 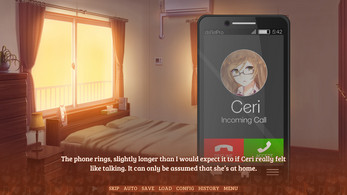 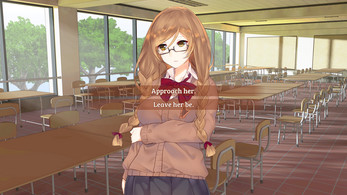 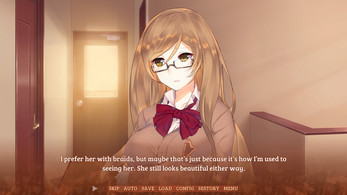 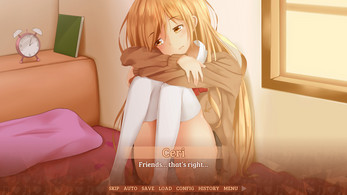 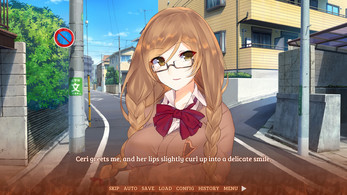